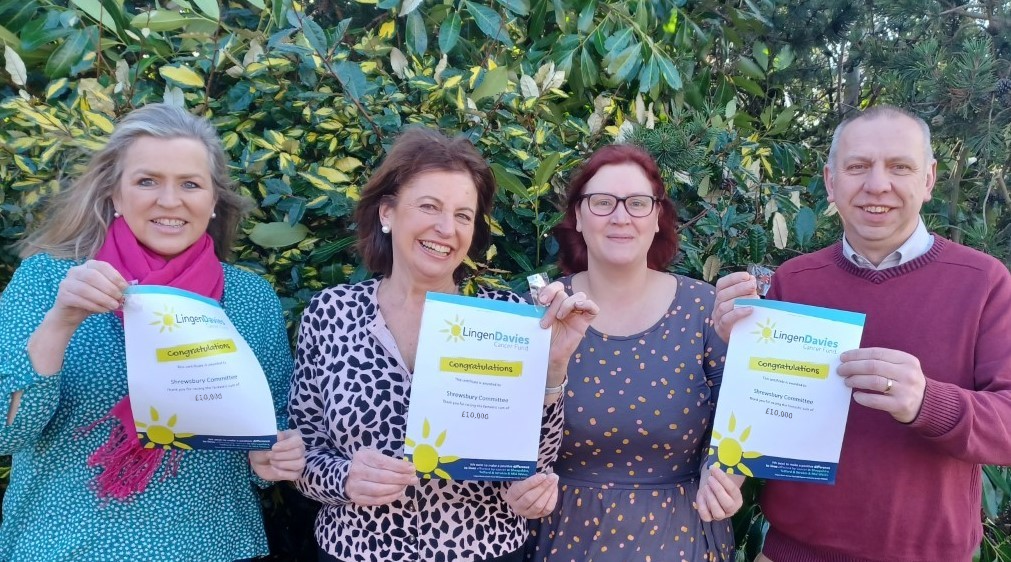 A small group of dedicated fundraisers has raised the phenomenal sum of £10,000 for us – in just under eight months.

Members of the Shrewsbury Committee of the Lingen Davies Cancer Fund have held several collections, activities, and events since launching in July last year. The group supports the work of the charity to improve the lives of those impacted by cancer throughout Shropshire and Mid-Wales.

The volunteer committee, established to oversee and enhance fundraising in a smaller area of our large geographical patch, is led by sisters Caroline Francis and Angela Hill. The pair became involved with Lingen Davies Cancer Fund after Angela underwent her own treatment for cancer at the Lingen Davies Cancer Centre at the Royal Shrewsbury Hospital. The sisters have helped raise thousands for cancer patients over the years and were the charity’s fundraisers of the year in 2019.

A wine tasting at Tanners, stall at the Minsterley Show, coffee morning, and collection at Theatre Severn’s panto are among the Committee’s fundraising successes.

Caroline, Vice-Chair of the committee, said working together as a small team of volunteers was a brilliant way to boost funds for the charity.

“It’s wonderful for like-minded people to come along and get together to plan and run fundraising activities. We make it fun and we’ve really gelled as a group, everyone has something to bring to the table and we have a lot of diverse skills between us.”

Colin Bore, Treasurer of the Committee, said Caroline and Angela are inspirational fundraisers and everyone wants to do their best for them.

“Everyone in the group brings something different and I’m really enjoying being involved. I’ve done a lot of volunteering for Lingen Davies and took part in Pedal the Borders last year. Being on the committee has really given me some fabulous new experiences,” he said.

Helen Knight, Head of Fundraising, said it was thanks to the hard work of people like the Shrewsbury Committee that charities are able to thrive in difficult times.

“We are really proud that despite the impact of the last few years we as a charity continue to grow, and a lot of that is down to the efforts of our supporters and volunteers. The Shrewsbury Committee is made up of a fabulous bunch of people, all keen to do their bit for charity.

“We cannot thank them enough for raising this incredible sum for us in just a few short months,” she added.

Lingen Davies Cancer Fund’s Shrewsbury Committee will be at Eyton Races on 18th April collecting for charity, some of them will be taking part in the charity’s 100km cycling challenge Pedal the Borders on 17th July which is open to everyone, and plans are underway for an open garden this summer.