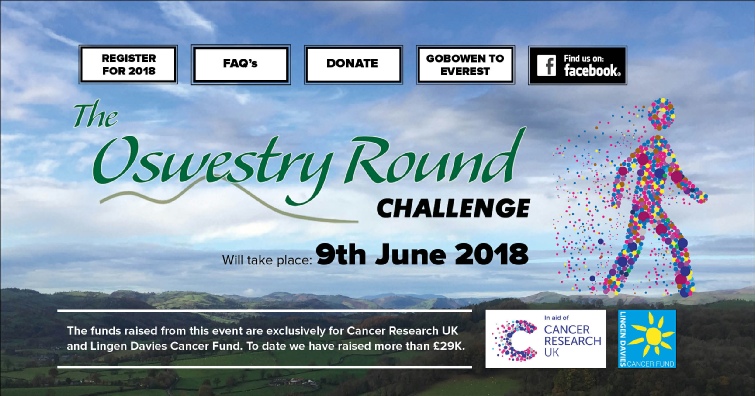 Home > News & Events > The Oswestry Round Challenge is back!

The Oswestry Round Challenge, a 33 mile walking challenge around the beautiful Oswestry and Mid Wales countryside, is now in it’s third year. Based on book written by Dave Andrews, one of our volunteer community coordinators, the route combines parts of Offa’s Dyke Path and the Montgomery and Llangollen Canals to form a complete circuit around Oswestry.

‘The Oswestry Round is a delightful route,’ explains Dave. ‘The Challenge is a great way to meet people, get some exercise and raise money for two cancer charities at the same time. It’s always a fun day, even when it rains!’

During its first two years the ORC and the book together have raised over £29,000 for Cancer Research UK and Lingen Davies Cancer Fund. The organisers’ aim this year is to raise a further £25,000.

Dave was treated in the Lingen Davies Centre in 2014 and he sees the book and the annual Challenge as ways of saying thank you for the care he received. You can find out more about Dave’s contributions to the charity here.

‘I wanted to put something back in as the staff at the Lingen Davies Centre were absolutely marvellous – always kind, helpful and caring. Jane and I are delighted that the book, which we published with help from Borderland Rotary Club, the Lion Quays, the Wynnstay Hotel and others, has raised over £3500 on its own. The Challenge has been a tremendous success and naturally we’re very proud of what’s been achieved. But we now want to build on this.

This year’s Challenge will be held on Saturday 9 June. Those who take part will be able to attempt either the whole route – all 33 miles – or just half of it and stop at Llanymynech and get a lift back to the start.

Find out more about the Oswestry Round Challenge and sign up here: http://www.oswestryround.co.uk/

Dave is also looking for volunteers to marshal the route or help with set up/take down on the day. If you would like to help please contact Jane Trudgill  at the Lingen Davies office.