Clare lives in Shrewsbury with her husband. She was diagnosed with breast cancer in 2011, and she has recently celebrated being cancer-free for five years.

“I went to see my GP because I had a cyst in my breast. I’d had cysts before, and I was expecting this to be a usual appointment, where the cyst would be drained and that would be it. This time however, the mammogram showed something unexpected behind the cyst.

They did some biopsies while I was there, and I was taken into a room and told that they had found something suspicious; it could be cancer, but they wouldn’t know until they had more results back. All I could say was “Oh, bugger!”. The consultant said “well, I’ve heard stronger than that but I can live with ‘Oh, bugger!’”.

I was completely oblivious to the idea that this appointment might be any different from previous ones, so I didn’t have anyone with me. It would have been great to be fore-warned, but of course they can’t do that until they have done the biopsies. I had a long wait of a week, which felt like a month, before I got the news that, yes, I did have breast cancer. From there on I thought, well, OK, what do we do now? 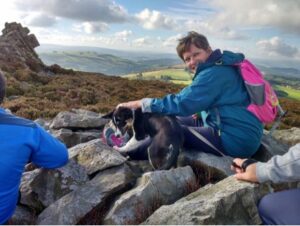 My mum had died eight months earlier from secondary bone cancer, so I was prepared for it from a carer’s point of view, but not from a personal point of view. I knew rather more than most people would do, which helped.

I was sent to the Princess Royal Hospital in Telford for surgery – I could choose to have either a mastectomy or a wide excision lumpectomy. I chose the wide excision lumpectomy – my reason for this was that I thought, if it came back, this would leave more healthy tissue to work with in future. The good news was that the cancer hadn’t spread into my lymph nodes, and was contained in the breast

I started chemotherapy in the old cancer unit at the Royal Shrewsbury Hospital. It was old, tired, cramped, and messy. Halfway through my treatment, the new Lingen Davies Cancer Centre was opened, and it was fabulous – bright, clean, airy and far more relaxing going through the process. It made such a difference. Fortunately I didn’t have massive side effects from the chemo but it wasn’t brilliant – oral thrush and nausea were the worst side effects for me. I did start to lost my hair, and rather than being scared of this I thought “hair always grows back”. I eventually made the decision to shave my head and wanted to make a bit of a celebration of it – my neighbour did it for me, and I decided to have some fun with it in one sitting – my hair went to a Mohican, then a “Tin-Tin”, and then completely shaved off. I did get fitted for a wig, but it wasn’t for me- the style I ended up with was called ‘Audrey’, and it did make me look like my Auntie Audrey! Instead, I gave up on the wig had a lot of fun with daft hats, silly scarves and bandanas. A lot of th

e time I just walked around with nothing on my head- even though it was winter, I had hot sweats as a result of chemo so it was more comfortable. At home we called these hot sweats ‘tea-towel moments’, because that is what I needed to wipe my baldy head.

I thought “you dare challenge me- I am a survivor, I am a warrior who is battling this thing, and you dare say any

thing”. Actually nobody did say anything. I went into the whole thing with a bit more confidence and self-assuredness, and I think that really helped. People embraced it and it was fine. I tried to make light of what I was going through.

I had 21 sessions of radiotherapy, which was there to completely make sure they had caught every cell of the cancer. It’s a quick and simple process and it didn’t hurt, but it was exhausting. They put little tattoos on your skin to make sure the treatment is going in the right place: my husband had always said that he’d divorce me if I ever got a tattoo but now I’ve got three and he’s assured me these ones don’t count, so he’s still here! It does cause a bit of soreness on your skin, but there are creams that help a lot. It’s a bit like sunburn and I ended up with a nice golden brown tan on a really small part of my skin, while the rest of me stayed white!

I was given Tamoxifen but I didn’t take to it. I was then put on Anastrazole instead; this is normally given to post-menopausal women and because I hadn’t gone through the menopause yet, I also had to have hormonal implants once a month for the next four years, in my stomach. These aren’t comfortable and I was so glad when I had my last one.

I do have some life changing side effects from the treatment – I suffer from Lymphedema, which affects my right arm and has impacted my ability to do the things I enjoy – I used to do a lot of sewing, patchwork and knitting but now this is more difficult. I have osteoporosis, and the hormonal treatment has sped up the development of osteoarthritis. I have also lost a number of teeth and now rely on a lot of falsies – I would encourage anyone about to go through treatment to really pay attention to your dental health- chemo and radiotherapy can both cause tooth decay and gum issues.

I’m now five years cancer-free; I’ve got my hair back; I’ve finally taken my last pill and had my last hormonal implant. I’ve made it through five years and despite it being hell at times, it feels like it has given me ‘permission’ to do what I want to do. I’m not going to feel obliged to keep doing a job I don’t like. I’ve always wanted to help people so I decided to retrain as a fitness instructor and I recently gained my Level Four Cancer and Exercise Rehabilitation qualification. 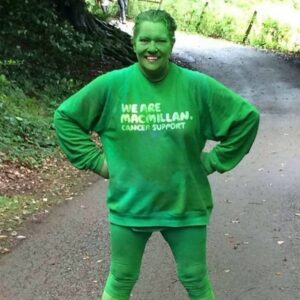 I’ve had great support from Macmillan, and from Lingen Davies through the equipment the charity has funded to get me through chemo and radiotherapy. The Hamar Centre [at Royal Shrewsbury Hospital] have helped me psychologically; I struggled to get my head around the effects of lymphoedema and I now say that if anyone argues with me, my right hand is my boxing hand – it’s got a lot more weight behind it!

I did a Race for Life not long after my treatment with my “Wheatley Warriors” team and again for the following 3 years. I do a lot of voluntary work for Macmillan, getting involved in fundraising, photography and throwing paint at Hawkstone Park colour run. I act as a Patient Champion at the Royal Shrewsbury Hospital, talking to patients who are newly diagnosed or just starting treatment. If  we aren’t willing to stand up and say those things [about our experience], and be open and honest to say these things to people, how are they going to know what to expect?  I am more than happy to speak out, if it is going to help others.

Yes, it’s scary. Yes, you don’t know what’s round the corner. Yes, you wonder how they know I’m definitely cancer-free after five years. But I’m still here, and I’m prepared to talk to other people and say, “you’ll go through some horrible moments but good can come out of it, and everybody is going to do everything they can to make it work.

At the end of the day – you are the one in the driving seat, so do and say what is right for you. Keep a list of questions you want answered and take someone level headed that you trust to speak for you at appointments because you’re not going to remember everything.”

Alun lives in Newtown and has two grown up children. He was diagnosed with prostate cancer in 2018, which had spread to his hip bone. He has recently begun chemotherapy and we will be catching up with Alun regularly as he goes through his treatment.