We are Lingen Davies Cancer Fund; we exist to make a positive difference to lives affected by cancer in Shropshire, Telford & Wrekin & Mid Wales.

We rely on the generosity of our supporters... 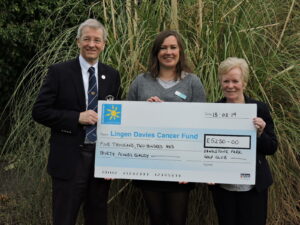 The Lingen Davies Cancer Fund raises money to; improve cancer prevention, enhance treatment  and support patients through their recovery. The Fund celebrates its 40th anniversary in June 2019  and its current appeal is to raise an additional £1.25 million.

Naomi Atkin said “We are very grateful for the generosity of the Hawkstone Park Golf club members. This is a wonderful sum of money that will contribute towards us reaching our £1.25 million target in time for our anniversary in June. Thanks to everyone who has contributed over the course of the year”.

Are you looking for ways to help support our charity?